In February of 2010, I weighed 230lbs.  Through Weight Watchers and a little work done to my arms and back, I was able to lose 55 lbs dieting and 5 lbs through laser lipo.  I was very happy and would still be happy if I hadn’t hit a plateau.  So now it’s back under the laser to lose the gut and muffin top.

When I hit 230, I was so devastated.  It was emotional getting so fat – eating and drinking just to pass the time or get through one pain or another took its toll on me.  So I decided to get on Weight Watchers in Feb 2010.  It worked amazingly, but the stubborn fat on my arms and back were disproportionately larger than the rest of me.  SO, I had laser lipo on those areas last April.  I lost about 5 lbs which was a drop in the bucket “weight-wise” – but I was able to get my eating habits under control and the Weight Watchers worked.  A total of 60 lbs later, and I am ready to get rid of this belly.  I’m not pregnant and I don’t want to look like I am.
Here are "Pictures Part 1" as I was gaining the weight to get to 230!  I will post later of what I look like now - before tomorrow that is :)

Myia
Washington, DC, United States
My name is Myia and I am the Patient Care Manager at American Lipo Centers. I handle all patient questions, appoinments and price quotes. I work for Dr. Gilad Segev and he is AMAZING! I am getting laser lipo on my upper abs, lower abs and flanks on Friday 7.15.11 (and rear flanks if I'm lucky).

My "Before" Picture (sucking it in) 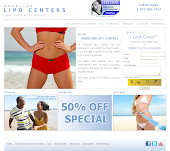